Allow Mistakes to Play Themselves Out

“Remember that sometimes not not getting what you want is a wonderful stroke of luck.”

ONE DAY IN MARCH not long ago, I embarked on what was expected to be a four-hour, 200-mile motorcycle ride to the Chesapeake Bay. I had the good fortune to exploit the day’s beautiful weather. The task of the day was to take photographs for One’s Origins of a place that is dear to my childhood memories and enjoy some time on my motorcycle. (I share more details in the book.)

Because of a GPS faux pas that was only user error to the extent that I might have not completely double checked something that should almost never need double checking, I got lost. Twice! Using early 21st century level technology! How do things like this happen? I was livid. The day wound up being 300 miles over six hours. Each of the two recalibrations sent me in two different directions, each time tacking on nearly an hour to the round trip.

When I stopped the second time I was lost, I realized I was low on gas. I had plenty of gas when I left the house. “This is not happening. This is a nightmare.”, I thought to myself. “I might not have enough daylight to take the pictures I want to take as it is, and now I have to find a gas station in the middle of nowhere?!” I was facing the real possibility that I had blown a gorgeous late winter day for a motorcycle ride (I mean sleeveless t-shirt gorgeous!) and would have to come back another day. I had with me a professional camera on loan for the day from a friend who owns a film production company. I entertained the thought of scrapping it, licking my wounds and going home. I would have to find another sun-drenched afternoon to borrow the camera again and that could be who knows when. Once I found a gas station, I recalibrated for yet a new set of directions and now my ETA was 10 minutes before sunset. Originally, it had been nearly two hours before sunset. I allowed my frustration to channel its way to social media with a profane rant lambasting the team responsible for the mapping software.

I figured I might as well continue on and take my chances. What I was now sure were the correct directions from the gas station was also in the direction of home, so I had little to lose timewise. To add insult to injury, the right place was not all that far from where I had been an hour earlier. In addition to my fear of losing daylight for taking pictures was my concern about falling temperatures riding home after dark. Warm days in March can quickly turn chilly after nightfall, especially on a motorcycle at highway speeds.

For nearly a third of my miles I pulled maneuvers on a touring motorcycle built for comfort for which such bikes are not designed. Nor are they maneuvers attempted by any rational person with a modicum of life-preserving instincts. I was riding as if my life depended on me taking these pictures on this day. I hope I never again believe for a minute that riding that way on this or any bike ever again is necessary, unless it is matter of life or death, which this was not.

I arrived 20 minutes before sunset. I dismounted the bike and grabbed the camera. I walked towards the edge of a steep decline to a narrow beach more than 30 feet below and gazed west by southwest across the bay to see a sun that was minutes away from tucking itself in for the night, and for the first time that evening my breath was taken away. Of all infinite possibilities for the sun’s location when I arrived, it could not have been in any better place than where it was. I knew the beach faced in the westerly direction towards sunset, but I did not know precisely where it set with respect to the place I wanted to photograph.

On the beach below is where I spent long summer hours during many family vacations when I was a child. Not far away from me on my right was an older couple sitting in their golf-cart watching the sunset together. They told me that they do this every evening on nice days. The woman further told me that this is the time of year the sun sets in the best place over the water. She explained that in the winter the sun sets slightly more south favoring the left side of the horizon, while in the summer the sun sets slightly more towards the west favoring the right side of the horizon. But this time of year, she said, is when the sun sets over the center of the bay. I conveyed my sincere appreciation of her telling me this and smiled in appreciation for being where I was at that time. 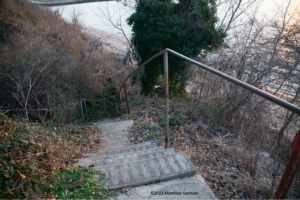 I climbed down the slightly zig-zag concrete staircase built into the steep hill to the narrow beach at the bottom. From down below, I stepped as close as I could to the water line without my boots sinking 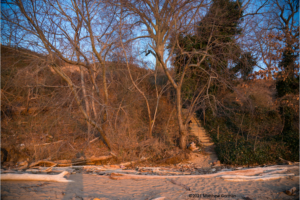 into the sand and took a photograph of the hill. The orange glow of the sunset rested on the hill with an indescribably brilliant hue.

I ascended back up the stairs and walked back to where my visual admiration had begun when I first arrived. The couple was still there, and I told them I was taking pictures for a memoir 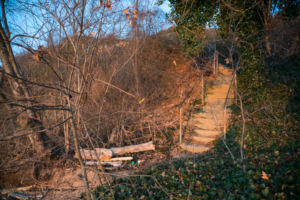 about adoption. The woman told me she too had given up a son for adoption when she was eighteen, the same age as my mother. My breath was taken away for the second time that evening. She continued to tell me that her son had found her many years ago and they have a relationship today. My heart jumped for joy for the both of them and it also broke in two for me. The woman with whom I was speaking had been in southern California when she gave birth to her son and that is where he was adopted, raised and still lives. Her son had found her using mechanisms that were available to me at the same time – several years before my mother had passed away.

I stood in silence for a moment as I realized that all my directional challenges that led me to arrive over an hour and a half later than I had planned were presented to me on purpose. I was not to arrive when I first thought I was to arrive. Instead, I was to arrive precisely when I did.

There was a long narrow horizontal cloud filling the thin space between the sun and the horizon of the bay that would soon block the view of the sun touching the water. But the sun dipping behind that cloud was awe-striking in its own right. The woman pointed across the bay in the direction of the setting sun and said, “That’s Aberdeen over there.” My breath was taken away for the third time. Aberdeen is where my mother grew up. I raised the camera up to take a picture of what not only my eye saw through camera’s lens, but also my heart.

I might never learn the circumstances around my conception, or how my mother and father met, but I have every reason to believe that across the bay from where I stood and vacationed many years ago is possibly where I was conceived. If I was not conceived there, I have learned that my mother spent the first part of her pregnancy with me living at home on the other side of the bay across from which I gazed. She was also likely living there for the first few years of my life, possibly including during the early years of my family vacations there.

After several minutes lost in stillness, I bid farewell to the couple and thanked them for making my visit more special. I walked back to my bike to prepare for the 93-mile ride home. I shook my head in shame for my earlier rant on social media. I pulled my phone from my pocket to delete it and to my greater shame, the platform’s gatekeepers had beaten me to it, and I received a warning about violating community standards. I was truly ashamed of myself in spite of the fact that the evening could not have been more perfect. Every mistake made in finding this place were not mistakes at all. They were gifts. Garth Brooks is not at all wrong. Some of God’s greatest gifts truly are our prayers left unanswered. This day I thought to be destroyed by navigational issues could not have happened on a better day. The weather was picture perfect midnight to midnight and I took pictures that would never have turned out as well at any other hour on this or any other day. Wearing my sweatshirt and leather riding jacket, which I had packed, the ride home was very pleasant.

Riding home I reflected on so many things I observed over the past couple hours. There was of course the shame of my undignified rant on social media. I have to live with that so 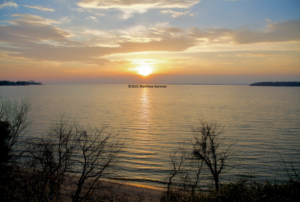 there is no point in dwelling on it and allowing it to ruin the ride home. What dominated my thoughts was this. I had gone there to take pictures from a place of my childhood memories, but I had no idea I was going to be taking pictures of a place I had been months prior to my birth. I found my origins lying across the bay just beneath the setting sun.

2 Responses to Allow Mistakes to Play Themselves Out