I was in a jewelry shop recently to have a silver bracelet oxidized. I like the gothic look of oxidized silver. It is a shop I have visited a few times in the past and I know the owner, a man about my age and his employee, a woman slightly older than me. She was the only one working this one day and it was not during peak shopping hours, so she was able help me with my request as I waited. It usually takes about five or ten minutes. I have attempted this myself at home with other silver jewelry, but the results were often either too dark or uneven. Most jewelers are happy to do this at nominal cost, and usually at no cost if the piece was purchased from them, which this bracelet was only a few days earlier.

As she was swirling my bracelet in the diluted liver of sulfur, which smells none to pleasant by the way, we began chatting. She asked the perfunctory, “So what are you up to?” to which I replied, “I am finishing up a memoir about being adopted and meeting many people to whom I am related, including four half-brothers, two each from my mother and father.” She, as are most people are when I say this, was quite fascinated and she asked me a question for which I was not prepared.

I had often imagined being in the role of interviewee speaking about One’s Origins and I believed I was prepared for just about any question that anyone could possibly ask that might remain open at the book’s conclusion, even the painful ones. In One’s Origins, I run the gamut of emotion from glee to loathing; I speak to worthiness, belonging, shame and bitterness with brutal candor, so I feel I am prepared for any questions whatsoever. In all imaginary preparation for hardball questions, I was prepared neither for the question she asked nor the bluntness with which she asked it. She didn’t really ask her question as much as she commanded that I answer her question. “So, tell me. Are you mad?”

For a fleeting moment I entertained the idea that she meant clinically. Giving the stories woven in and throughout One’s Origins it’s a fair question. Lord knows madness is a mood for which no one lacks reason for feeling, in either form. But I quickly concluded she meant it to mean angry. Also striking was the tense of her question. She did not ask the question in past tense, “Were you mad?” She asked, “Are you mad?”

I briefly pondered my response as I owed her an honest answer. After a few seconds of pause and reflection I said, “I don’t think so.” While this answer was and remains my honest answer, it has since left me wondering in fact if I am. Certainly life has granted me many opportunities to be mad both emotionally and clinically, but despite occasional outward displays of madness I have always assumed that I maintained the upper hand. Inwardly however, am I in as much control as I claim to be? It’s a very fair question and one to which perhaps I do not know the true answer. Because of this I must be prepared 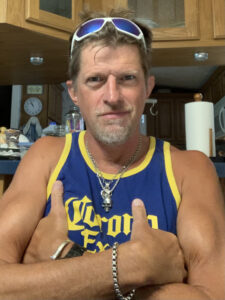 for and accept that, yes, maybe I am. The next challenge is to ask, “If I am systemically mad (in the angry sense), why?”

My question for you here and now is, in this self-taken photograph, do I look a like person who is mad. When I took this picture, I had no reason to feel either elated or downtrodden. I was simply at peace after messing around with a new melody on my guitar and was feeling rather pleased with myself. Still the question remains, “Am I mad?”

1 Response to Are You Mad?